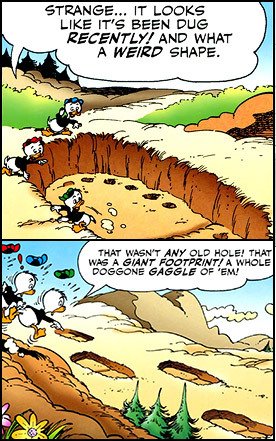 "Where most people had a social media footprint, hers was like that one movie with the giant monster where the scientists didn't even realize they were standing in the middle of the print until they zoomed out."
— Whateley Universe
Advertisement:

The unsuspecting heroes run into a huge crater in the ground and take it for a natural formation... until the disturbing realization dawns that this is actually merely the footprint of something really big. For the benefit of the audience, this moment usually comes in the form of a Reveal Shot or Flyaway Shot through which one gets a better look at the colossal size.

A common way of heralding the presence of a giant monster — whether it's a Kaiju, a gigantic ape, a giant man or Giant Woman, or an Attack of the 50-Foot Whatever. The discovery of the footprint crater builds suspense for a future encounter with a monster of truly epic proportions.

Alternatively, on some occasions the footprint might be old news, and whatever left it long gone, but even then the sheer magnitude and Spectacle of the print can still be a source of awe and mystery in the setting. The idea of human Precursors who were once many times the size of modern humans features in a number of real-world myths and religions.

Explorers of the Isle of Giant Horrors are prone to finding one of these. One step removed from That's No Moon!, where what seems to be a natural landmark turns out to be the creature itself, or something else, something dangerous. Compare Giant Foot of Stomping and Trampled Underfoot, where we actually get to see the monster making an impression on the characters.