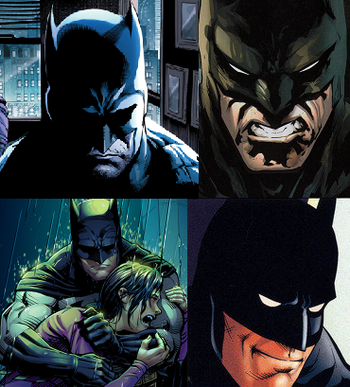 Margo: Who are we now, El? We used to be glamorous, amazing mega-bitches. And now?
Eliot: We have depth. And... character.
Margo: [looks horrified]
— The Magicians (2016), "Do You Like Teeth?"
Advertisement:

One of the basic traits of a character is their depth, or how complex they are. Some characters are two-dimensional Flat Characters, with one or a few defining traits that completely define who they are. Rounded Characters go beyond being a stock character with some Backstory and Hidden Depths. They generally have a complex motivation driving them, and may act counter to what their 'type' would suggest. These are the kind of characters that have to struggle with choosing and get to go through Character Development. Fundamentally, every rounded character should have defined a few things:

Depending on the interaction of those three elements, the character's arc is defined

. The upbeat Transformation arcs are all about healing the Wound and realizing the internal Need, thus becoming better people in the end. This is accentuated in Redemption arcs, just with a more tortuous path to get there. Those are the positive arcs, on the other hand, we have the negative arcs where the character doesn't get to heal the Wound. Disillusionment arcs follow the same structure as the Transformation arc, but the Truth the character realizes to fill his/her Need is terrible, leading to a Downer Ending. In a Corruption Arc, which inverts the Redemption Arc, the character starts out actually acknowledging the Truth, but temptations seduce him/her to reject it and embrace the Lie and Want and stop trying to heal the Wound. Fall Arcs are a subversion of the Redemption Arcs because while the character pursues his/her Want and believes his/her Lie at the start, he/she soon comes to reject his/her Need and Truth at the critical moment where he/she should have gotten his/her epiphany, thus never healing the Wound.

A Flat Character may evolve into a three-dimensional character if they are dynamic, and change according to what they experience. On the other hand, sometimes they don't need to change and remain Static Characters. The latter is what we call Flat Character Arcs where it is not the character himself/herself who changes, but the world he/she lives in, often because of his/her actions. This kind of character is more or less at peace with the Wound and acknowledges his/her Need, but may still pursue his/her Want (just without the Lie). Alternatively, the character remains troubled by the Wound but refuses to change his/her ways.

Not to be mistaken for actually rounded characters.