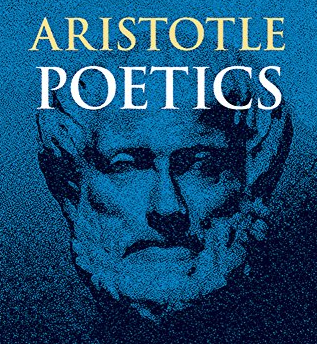 A beginning is that which does not itself follow anything by causal necessity, but after which something naturally is or comes to be. An end, on the contrary, is that which itself naturally follows some other thing, either by necessity, or as a rule, but has nothing following it. A middle is that which follows something as some other thing follows it. A well constructed plot, therefore, must neither begin nor end at haphazard, but conform to these principles.
Advertisement:

Aristotle may not have been the first troper, but he's the first troper for whom we have evidence, and the evidence is this work, Poetics, the great-grand-daddy of all Books on Trope. (Incidentially, Poetics is not the Greek name but the Latin translation.)

It is based on his analyses of Greek epic poems, such as Homer's works, and of Greek tragedies—a term which, at the time, did not require an unhappy ending; nowadays we tend to call it Drama. note ("Epic", similarly, didn't only mean "big-scale/large-scope"; it was basically the ancient equivalent to the Action-Adventure genre.) Early on in the text, he even promises an in-depth look at Comedy. Sadly, that section's long been lost—though we do get a few pointers in the text we have, on his basic thoughts on the genre. Full text here

Poetics is considered the most influential work of criticism ever, introducing ideas like three-act structure of beginning-middle-end as well as the dramatic unities. It defined the purpose of tragedy, the pros and cons of various kinds of plots, all of which actively shaped theatre for several centuries . As a result of the fortunes of history, Poetics had a bigger influence on French and German drama than English theatre (who largely followed the aesthetics of Roman Drama and criticism and as such routinely violated Aristotleian unities). The funny thing about this work is that while Greek tragedies are often studied through the lens of Aristotle's terminology, these tragedies were not really defined by these tropes themselves and indeed contain, as Aristotle himself notes, many an Unbuilt Trope. Aristotle was merely describing and analyzing existing drama after the fact.