Film / The Bodyguard From Beijing 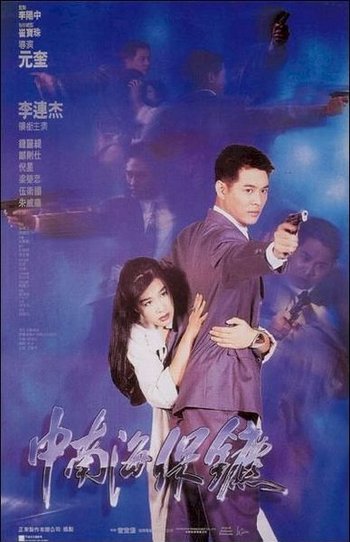 Not pictured: At least 40 assassins outside of the frame...

The Bodyguard From Beijing, also known as The Defender, is a 1994 Hong Kong action film produced by and starring Jet Li, directed by Corey Yuen.

Jet Li stars as John, the titular bodyguard, one of the best from the Beijing military academy (as the title states) whose latest assignment is to guard the life of Michelle Leung (Christy Chung), the girlfriend of a wealthy Hong Kong businessman whom had witnessed a murder. After three prior witnesses have been killed, the Hong Kong police is entirely unavailable to send bodyguards reliable enough to protect Michelle, save for two bumbling rookies Charlie and Ken, and John is the best man for the job. Unfortunately, the syndicate who wants Michelle's life has sent Wong, a fellow ex-hitman who was trained in the same academy as John, and is close to as skillful as John is.

This is the first 90s movie starring Jet Li that is NOT a Wuxia or period-piece film. Its closer to a Heroic Bloodshed film compared to what Jet Li was known for at that time, what with the hero taking on legions of mooks, over-the-top gunplay, and an insanely high onscreen bodycount.