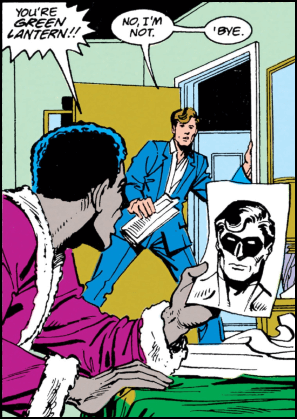 It's a miracle it didn't happen to Hal Jordan sooner.
Advertisement:

Bob is walking down the street, trying his best to look inconspicuous. All of a sudden, a stranger comes up to him and goes, "hey, you're that famous singer Bob!" Bob tries his best to deny it, saying "I'm sorry, but you've got the wrong guy" or "you must have me confused for somebody else" - but it's useless, and soon he's mobbed by the crowd.

This is mostly used when a celebrity, fugitive or other public figure needs to escape notice and fly under the radar, but has his cover blown. More often than not, it doesn't work, and is often played for laughs.

Compare King Incognito, and often leads to an attack of the Groupie Brigade.