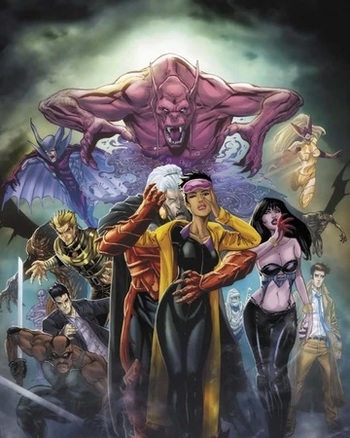 "There are as many types of vampire as there are disease; some are virulent and deadly, and some just make you walk funny and avoid fruit."
— Terry Pratchett, Carpe Jugulum
Advertisement:

So you want to put vampires into your setting. But if All Myths Are True, how do you reconcile the many different and contradictory myths about vampires? The most common answer is to pick and choose traits that work for your story, or make some up, and proclaim that Our Vampires Are Different. But another approach is to say that these contradictory myths are referring to different kinds of vampire that all coexist together.

Often this means that there are multiple supernatural species that are thrown under the umbrella term "vampire", although occasionally they are all the same species but with minor differences. These differences can include different strengths and weaknesses, social structures, preferred prey and hunting grounds, so a Vampire Hunter is advised to be informed about them lest he shove a cross at a vampire of a clan that crosses don't work on.

When a new vampire is created, they will be of the same type as their sire; as such they are usually called "clans" because they are essentially a large family, although "bloodline" is another common term because... well... vampires, blood... The different clans may get along well with each other, but are usually plotting and scheming against one another for resources (or just to liven up their eternal lives); sometimes they are outright at war with one another.

Often a clan will be named for its originator, who will be the leader of the clan if they're still around. It's also sometimes the case that each clan founder in turn share a sire, who may be the originator of the vampire species. If that guy is still active, he's your best bet for a Vampire Monarch. If not, expect him to be Shrouded in Myth. Given the common trope that killing a vampire's sire kills (or cures) the vampire, such progenitors may be the key to destroying the entire clan at a stroke.

Particularly common bloodlines include a more refined and high-class one with little beyond tasteful fangs to mark them outwardly, sometimes embodying the modern view of vampires as seductive predators; a more bestial, highly monstrous one, typically called "strigoi" or "nosferatu", which may be visibly batlike even in human form; an especially corpse-like one that puts particular weight on vampires' undead nature; and the life energy-draining vampires of Chinese myth, usually called eastern vampires or jiang-shi.

Sub-Trope of Our Vampires Are Different, obviously. A Council of Vampires may be made up of representatives from each clan. Compare Actually Not a Vampire. See also Totally Not a Werewolf. For another type of very varied fantasy creatures sometimes used in this same manner, see Dragon Variety Pack.