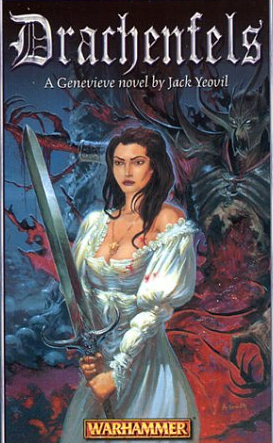 A Ragtag Bunch of Misfits travel to the Haunted Castle of the Evil Overlord Constant Drachenfels. One by one they fall to his minions and his Death Traps, until only the brave prince remains to fight the sorcerer and vanquish him at last. That's the prologue.
Advertisement:

Twenty-five years later, Detlef Sierck, the Empire's greatest playwright, is rescued from debtor's prison by the Crown Prince Oswald. Oswald, the aforementioned brave prince, has a simple proposition for Detlef: he wants to produce a play about his defeat of the Great Enchanter Drachenfels, and he wants Detlef to write and star in it. The surviving members of the original band who traveled with Oswald are reunited for the play's premiere, a one-time performance staged in the very walls of Drachenfels' abandoned fortress, attended by all the nobility of the Empire. What Could Possibly Go Wrong?

Drachenfels is a Warhammer novel by Kim Newman under his Jack Yeovil pen name, first published back in 1989. It occupies a bizarre place in the Warhammer canon, suffering from a huge, setting-wide case of Characterization Marches On. Constant Drachenfels hasn't been mentioned in the background for years, having long since been displaced by Nagash the Great Necromancer as the setting's necromantic Big Bad. Details like goblins being willing to work for humans and vampires mingling relatively openly in Imperial society will look like massive errors to anyone who got into the fandom any time after the early nineties. Thing is, people really like it, so Games Workshop keeps it in print and other authors give it Shout Outs on a regular basis.

The protagonist of Drachenfels, the vampire Genevieve, went on to have a small role in the novel Beasts in Velvet and then to star in a collection of three novellas called Genevieve Undead and a short story collection called Silver Nails.