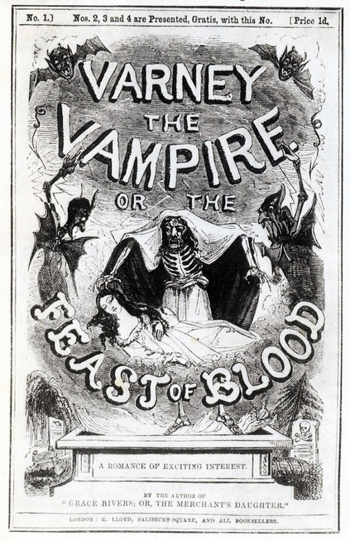 "The figure turns half round, and the light falls upon its face. It is perfectly white — perfectly bloodless. The eyes look like polished tin; the lips are drawn back, and the principal feature next to those dreadful eyes is the teeth — the fearful looking teeth"
— From Chapter I
Advertisement:

Varney the Vampire, or, The Feast of Blood by James Malcolm Rymernote published anonymously and attributed by some scholars to Thomas Preskett Prest was one of the original vampire penny dreadfuls (c. 1845-47).

It's a bodice-ripper with 220 chaptersnote nearly 667,000 words (longer than War and Peace!) of riveting Victorian Gothic Horror and one hell of an ending!

Varney was an enormous influence on later vampire literature, such as Dracula (1897) by Bram Stoker. Many of today's standard vampire tropes originated with Varney: Varney has fangs, leaves two puncture wounds on the necks of his victims, has hypnotic powers, and superhuman strength. Unlike later fictional vampires, he is able to go about in daylight and has no particular fear or loathing of crosses or garlic, though he operates mainly at night as moonlight heals him of injury. He can eat and drink in human fashion as a form of disguise, but he points out that human food and drink do not agree with him. His vampirism seems to be a fit that comes on him when his vital energy begins to run low; he is a regular person between feedings.

Varney is also one of the first examples of the "sympathetic vampire," a vampire who hates his night job but is a slave to it nevertheless — a theme which has become popular in modern vampire fiction. Varney's conflict eventually leads him to drastic action.

The entire text of Varney the Vampire is available for free online.