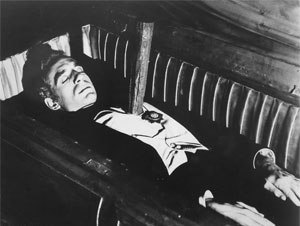 Walsh: We use the latest in scientific technology and state-of-the-art weaponry and you, if I understand correctly, poke them with a sharp stick.
Buffy: Oh, it's more effective than it sounds.
—Buffy the Vampire Slayer, "A New Man"
Advertisement:

The favorite weapon of the Vampire Hunter, and frequently the only thing capable of finishing them off for good, is a wooden stake through the heart. And yes, it has to be wood; only wood can kill a vampire when it comes to piercing their heart.

This may be because the wooden stake was a once living plant, much like the vampire was a once living human, unlike the sword which was never alive. Yes, this occasionally means that someone can be killed via pencil to the heart, or that a bow and arrow can be more effective than a gun.

Slavic versions of folklore specify that it has to be not just any wood, but specifically quaking aspen, generally a bane to all creatures of the dark; some trace it back to Bible, stating that aspen was the tree Judas Iscariot hanged himself on.

In early vampire fiction, stakes were simply used to pin a "vampire" into its coffin while it slept, keeping it from waking back up and causing trouble; some old graves had several stakes in it, as wood eventually rots and has to be replaced. It was also a lot harder to get the stake in than it is in modern fiction — you had to hammer the stake in with a mallet or a gravedigger's shovel to get through the vampire's ribcage (and in some regions, through the dirt and coffin itself, to avoid digging). This went along with such nice methods of preventing vampire from rising up as placing a sickle on their neck (so the vampire would sever its own head if it moved) or putting vampire-repelling plants such as garlic in the coffin.

When the stake became an all-purpose vampire-killing weapon is unclear. Different authors disagree on whether a wooden stake can be used as a spear (or an arrow) against a vampire when not in the coffin.

Subtrope of Attack on the Heart.