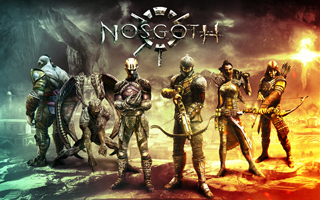 This is a war for Nosgoth.
Advertisement:

Nosgoth is a cancelled online free-to-play multiplayer game created by Psyonix and Square Enix set in the universe of the Legacy of Kain series. After Kain's rise to power and the enslavement of humankind, free humans have been scattered to the far reaches of the world. After executing his first lieutenant, Raziel, by ordering him to be thrown into the Lake of the Dead, Kain disappears into the timestream to look for a way to avert Nosgoth's gradual decay. This left his five remaining lieutenants in charge. The Great Clans began fighting among themselves almost immediately and humankind took this as their cue to take back Nosgoth. In secret, humankind had rebuilt their society, developing technology to level the playing field against their supernatural overlords. The vampires, suddenly faced with a common enemy, unite. Now a war for Nosgoth between humanity and the vampire clans is waging.

A war where every battle is comprised of two ten-minute rounds for up to thirty kills a round.

Compared to the rest of the series, Nosgoth was not story driven. Lore was released alongside new content and it can be currently read here

, but the game itself contained very little overall plot. The gameplay was third-person, with the Human faction being ranged and the Vampire faction being melee. There were five classes for each faction (with plans to release more) each with their own distinctive abilities. Each battle involved eight players, with both teams of four swapping to the other faction after ten minutes or thirty kills. There were two different game modes: Team Deathmatch and Flashpoint (King of the Hill). Sometimes Flashpoint was replaced with Drag the Body, a capture the flag like game mode that the developers did not finish. There were plans to release more maps, classes and gameplay modes, the majority of which never materialized.

On April 08, 2016 Square Enix Europe abruptly announced that Nosgoth's servers were shutting down on May 31, 2016. Officially, Square Enix claims that the cancelation was due to Nosgoth "failing to captivate a broad audience".