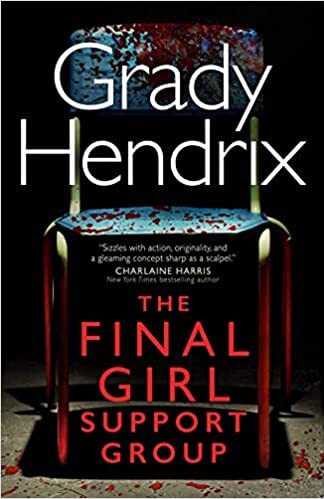 "Out there in the world it's a nonstop murder party, and if I make the slightest mistake, I'll wind up dead."
Advertisement:

The Final Girl Support Group is a 2021 novel by Grady Hendrix, which pays homage to the slasher genre.

Lynnette Tarkington is a real-life final girl. She witnessed and survived not one, but two mass killings and the events have left her traumatized and constantly looking over her shoulder. And she's not alone. For more than a decade she's been meeting with five other actual final girls and their therapist in a support group for those who survived the unthinkable, putting their lives back together.

The support group has to keep their very existence secret. Each of the women were able to turn their events into movie franchises, to varying degrees of success. Fans of both the original killers and the films they inspired are known to stalk and harass them, along with anyone who thinks that getting a good soundbite to sell could be their ticket to fame and fortune.

Then one day, one of the women misses a meeting and Lynnette's worst fears are realized—someone knows about the group and is determined to take their lives apart again, piece by piece.