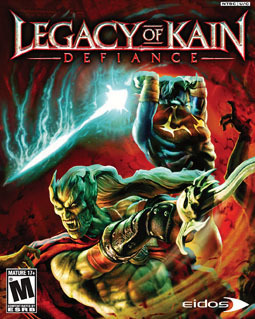 The fifth and thus far final installment of the Legacy of Kain series, released in 2003.

Defiance continues the journey of Kain and Raziel. After having Raziel killed to be revived by the Elder God as a wraith during the events of Legacy of Kain: Soul Reaver, Kain travels backwards through time and is followed by Raziel into Nosgoth's past, uncovering the conspiratorial events that led to the land being doomed to an eternity of corruption. After establishing his free will by refusing to kill Kain when prophesied, Raziel discovers that Moebius the Time Streamer had originally manipulated Kain into igniting a genocidal war against Vampires until he was the last of his kind. In manipulating Raziel who has free will and thus whose decisions and actions cannot be foreseen by Moebius, Kain hopes to find a way to undo the consequences of his actions and restore Nosgoth to its former glory.

Legacy of Kain: Defiance contains examples of the following tropes: