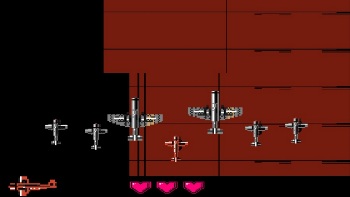 Get used to allies. You'll need them.
Advertisement:

Not August is a Jake Clover freeware Shoot 'em Up game for PC, released in June 2013. The game is arguably the most normal of his works so far, with three mid-sized levels and three planes to choose from. While it has no plot to speak of, the game is generally agreed to be a symbolic deconstruction like his earlier works. It can be donwloaded here