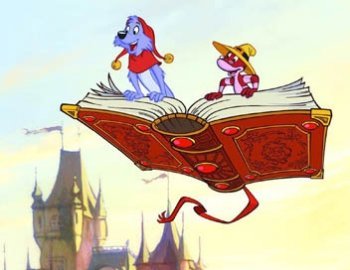 "Long ago, when miracles still happened, there was a magic spell, which opened a gateway to the enchanted land of Simsala. The place were all the fairytale characters really lived. Abracadabra. Simsalagrimm."
—Narrator
Advertisement:

Simsala Grimm is a 1999-2000 German cartoon, following the adventures of two creatures: Yoyo and Doc Croc, who transport themselves to fairy tales on a magic book that takes them to one of various stories each episode. Once there, the duo try giving advice to the main character of the story and help them get to their happily ever after.

In 2010 the series was continued with 26 new episodes, which took another fairy tales aside from The Grimm Brothers tales.