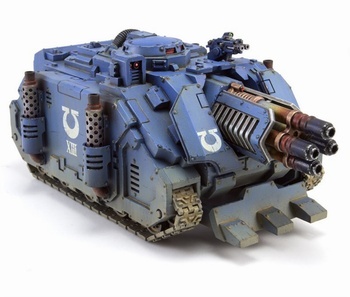 Let's hope the enemy went to the Prometheus School of Running Away from Things.
Advertisement:

Sometimes a full broadside cannon barrage isn't enough to bring down those pesky enemy ships. Or the enemy may be running away as fast as they can, and you don't have time to turn and give them the full fury of your weapons array. That's why you should remember to design your ships with a really big weapon pointed straight forward, to make running away very unattractive as the cannon rips into them from behind.

The core of the trope is that the weapon cannot be independently aimed — it can only fire in a fixed direction relative to the ship (typically straight ahead), so you have to maneuver the entire ship in order to aim it. This is typically because the weapon is so large that it takes up a significant portion of the ship's mass and/or volume, so mounting it in a turret is impractical or impossible. It can be nose-mounted, dorsally mounted (on the top surface of the ship), ventrally mounted (on the bottom), or a "spinal weapon" (where it runs along — or in extreme cases is — the spine of the ship). Simply put, this is a gun, with an attached ship or vehicle to move it.

Commonly referred to as the "main gun" or some other such name to indicate how much more powerful it is compared to the other weapons.

Nearly all fighter aircraft use this system for their guns (due to size, weight, aerodynamics, single-seaters' lack of additional crew to man the guns, and modern fighters mostly using long-range homing missiles or precision-guided bombs), so specific examples need not be listed. Many tanks, tank destroyers, and assault guns have been designed in this way as well, sacrificing field of fire for extreme forward punch.