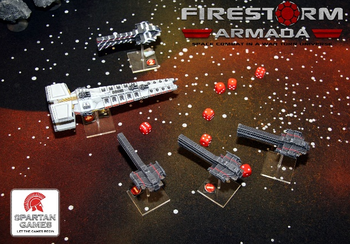 "There's nothing quite like the look on your opponents face when you steal a battleship out from under his admiral."
— Unknown
Advertisement:

Firestorm: Armada is a science fiction Wargame setting produced by the UK based Spartan Games. It has undergone only slight rule revisions since its initial release in 2010, and maintains a small but loyal fanbase in most areas. It is played as a tabletop wargame where two or more players use a variety of ships to attempt to destroy the enemy fleet, capture enemy ships, or achieve certain objectives.

The game was in the process of Kickstarting a new edition when the company folded in August, 2017

. The IP was later acquired by Warcradle Studios.

It also has the sister game, Firestorm Invasion/Firestorm Planetfall about the ground forces during planetary invasion.