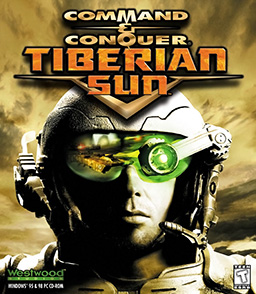 EVA: Welcome back, commander.
"I've seen the future. Our Tiberian future. And as you watch this battle just beginning to unfold, I've already seen the final act. It is my destiny to lead the way for all mankind..."
— Kane to General Solomon
Advertisement:

Tiberian Sun is the second installment in the Command & Conquer: Tiberian Series. Set in 2030, tiberium is now spreading unchecked, forcing humanity to flee to the arctic or desert regions that can at least slow the substance's progress. As governments break down and GDI does its best to bring order from the chaos, Kane reappears to lead a reunified and invigorated Nod into battle once more. A crashed alien spaceship and an extraterrestrial artifact called the Tacitus hint at a larger purpose behind Tiberium, but ultimately Kane's attempt to use a missile to increase Tiberium's spread is thwarted with the man's death (again).

Released in 1999, the game notably raised the cutscenes profile of the saga, featuring for the first time renowned mainstream actors such as James Earl Jones and Michael Biehn. The Scrin technology makes its first appearance in this game, as well.

An expansion pack was also released, called Tiberian Sun: Firestorm, in which Nod's battle AI, CABAL, revolts and leads a cyborg uprising, forcing GDI and the remnants of Nod to unite to defeat him.

Tiberian Sun and its expansion were released as freeware by EA in 2010. Official Download

A Nod solider notices a surviving GDI pilot and decides to finish the job.

A Nod solider notices a surviving GDI pilot and decides to finish the job.