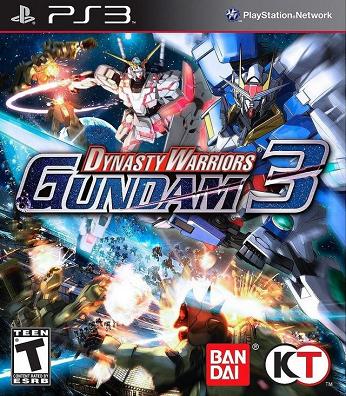 Damn it, Setsuna, watch where you swing those things! Those logos aren't cheap, you know.
Advertisement:

As could be guessed from the title, Dynasty Warriors: Gundam (Gundam Musou in Japan) is a licensed Spin-Off of Koei's popular Dynasty Warriors Hack and Slash series of games, flavored to the tastes of Bandai's immensely popular Gundam series of Humongous Mecha anime - the very first in a long line of licensed Dynasty Warriors spin-offs, in fact. Perhaps sadly, it does NOT, however, involve the characters of the Three Kingdoms and Feudal Japanese Eras climbing into Mobile Suit cockpits and taking over their respective countries with giant robots... yet.

As with the Dynasty and Samurai Warriors series, DW: Gundam tells the tale of a famous period of warfare by way of having a player take control of influential combatants of the day and sending them on a Foe-Tossing Charge through depictions of noted battlefields while taking down millions upon millions of Mooks. However, the big twist here is that the famous period of warfare depicted in this series is the completely fictional Gundam universe. The battles are fought not by people, but rather by influential Mobile Suits of each period, and the charges leaving dismembered Mecha-Mooks and lots of Stuff Blowing Up in their wake.

Not wanting to leave fans of universes other than Universal Century (and in Reborn, Cosmic Era) left in the lurch, Koei and Bandai Namco also decided to throw in the "Original Mode" (Later replaced with "Mission Mode" and "Ultimate Mode") in which groups of pilots from across the various Gundam Universes are brought together for the sole purpose of beating the ever-loving tar out of each other's MS.

So far, there have been the following installments in the series:

Not to be confused with BB Senshi Sangokuden, which is the story covered by Dynasty Warriors with (or more accurately as) Gundams.

Tropes used in the games: