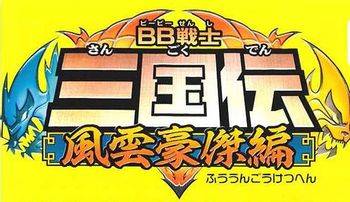 BB Senshi Sangokuden (BB戦士三国伝) is a toyline created by Bandai, commemorating the 20th anniversary of SD Gundam, and going from 2007 to 2011.

A continuation of the long-running BB Senshi line of SD Gundam models, this series also draws upon Romance of the Three Kingdoms for its characters, whose designs are all based on classic Gundam models from the Universal Century to the semi-recent Gundam Wing and G Gundam. So far, the story has been divided into three chapters: Fuuun Gouketsu Hen, Eiyuu Gekitotsu Hen and Senjin Kettou Hen. Expanding on this is the sidestory Sangokuden Gaiden: Buyou Gekitou Roku, and an Animated Adaptation, SD Gundam Sangokuden Brave Battle Warriors, (SDガンダム三国伝 BraveBattleWarriors) which aired after Sgt. Frog, and can be found on YouTube. The anime also had its own sidestory manga titled Brave Battle Warriors Genesis, which had four story arcs that focused on Ryuubi, Ryofu, Sou Sou, and Sonsaku.

Note: This article uses the Japanese version of Romance of the Three Kingdoms, and as such "Cao Cao" = "Sousou", "Liu Bei" = "Ryuubi", "Sun Quan" = "Sonken", as the English dub uses those names(Ironically, the subtitles use the original names).