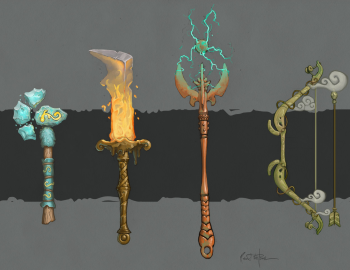 A weapon created or empowered by the use of Elemental Powers, like a sword wreathed in flames or a spear made of ice. One reason is to give an already deadly weapon extra edge. Another reason is that it simply looks totally freakin' cool. An elemental weapon may be able to absorb and deflect its own element or inflict damage associated with it (like electrocution by an electric-based weapon) allowing for Elemental Rock–Paper–Scissors with weapons.

People who can already control the elements may be able to create such weapons via Spontaneous Weapon Creation. An Ultimate Blacksmith might have the ability to craft such a weapon. Might be a type of Enhanced Archaic Weapon.