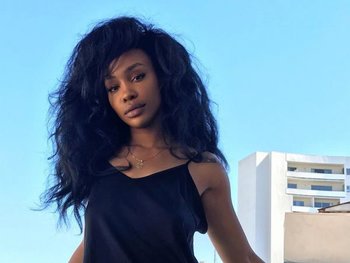 Why you bother me when you know you don't want me?
Advertisement:

After meeting members of record company Top Dawg Entertainment at a Kendrick Lamar concert, she self-released her first EP, See.SZA.Run. in October 2012. She followed this up in April 2013 with her second self-released EP, S. Her first breakthrough, however, came in the release of her first studio EP, Z, in April 2014. It was her first to appear on album charts and got her noticed.

She then disappeared for a while, recording her debut album slowly over the course of 2014, 2015, and 2016. Originally slated to be called A, it was released on June 3, 2017, under the title Ctrl. It debuted at #3 on the US Billboard Album Charts. Just a few months later, her commercial breakthrough came in September that year when she was featured on Maroon 5's #9 hit "What Lovers Do". Her own singles started charting after that, with "Love Galore" peaking at #32 and a Calvin Harris remix of "The Weekend" hitting #29. In March 2018, she was nominated for Best New Artist, Best R&B Performance, Best R&B Song, Best Rap/Sung Performance, and Best Urban Contemporary Album at the 60th Grammy Awards. However, controversially, she won none of them.

Not to be confused with RZA.

How you want me when you got a trope?