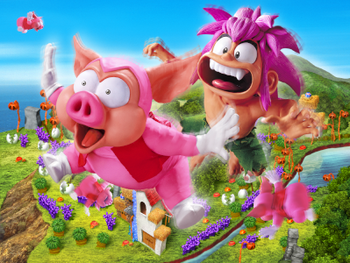 "Tomba loves you, and by golly, America loves Tomba."
— US Commercial for Tomba!
Advertisement:

Tomba!, known as Tombi! in Europe and Ore! Tomba in Japan, is a cult-favorite 2½D platform-adventure series composed of two games starring a pink-haired jungle boy. Tomba must fight the Evil Swine, who have turned the world into a much darker place through the power of their own evil magic, using platforming skills across a fairly large game world.

The game is notable for its quest structure, in which you receive points for every objective completed, instead of just simply going from one point to the next as is the case with many platformers. Also, the plethora of hidden objectives made this a kind of Platformer-RPG fusion.

Two games were released for the PlayStation: