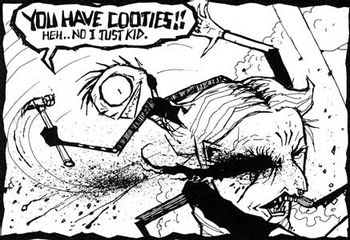 Johnny's wacky like that.
"Like I said, kids are cruel, Jack...and I'm very in touch with my inner child!"
— Sundowner, Metal Gear Rising: Revengeance
Advertisement:

What makes this character stand out is that he is The Sociopath in that he is mostly incapable of feeling empathy, shame or remorse but unlike other sociopaths, his mental immaturity prevents him from imitating emotions or indeed even realizing why he takes his desires for granted and fails to even superficially consider why others would disagree or why he isn't entitled to everything. The more charismatic type is excepted from this, of course, though it usually still shows up in some fashion; these types are often impulsive or prone to abandoning plans for stupid reasons, and may have trouble grasping cause and effect. Whichever version these types of characters qualify as, often they are not fully aware of how nasty their actions actually are. In some cases (though not all), a Heel Realization may cause the character to develop into a better person. A more innocent or well-intentioned Psychopathic Manchild may be a Noble Demon. Unlike the more benign Manchild who is presented as Always Male, a Psychopathic Manchild can appear in either gender.

Most of the time, this character trope has a Hair-Trigger Temper and is prone to Disproportionate Retribution because of it.

The grown-up equivalent of Creepy Child and the near-inversion of Enfante Terrible. Often an enemy of a Sociopathic Hero though the two aren't mutually exclusive (and tend to overlap quite a bit) and contrast with the typically more benign Manchild. See also Cute and Psycho and Ping-Pong Naïveté. Related to, but distinct from, Kids Are Cruel. Can and often does overlap with Immortal Immaturity.