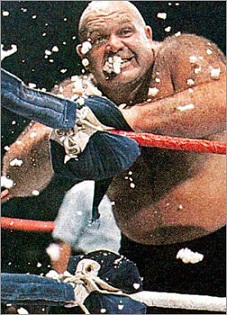 William James Myers (April 16, 1937 – February 16, 2017) was an American professional wrestler and actor from Madison Heights, MI best known for his work in WWE from the 1960s through the 1980s as George "The Animal" Steele. He started his career in Detroit in the 1960s under a mask as The Student and was the first wrestler managed by Gary Hart, who would go on to be better known for his work in Texas. As he was a teacher and football coach in Real Life, he would wrestle during the summer and school vacations for extra money. He dropped the mask and became George Steele, taking the last name from how he would be working in Pittsburgh, which is known as the Steel City. He worked on and off for WWE for years as a Heel, until he finally retired from teaching in 1985-1986. He retired from full-time competition in 1988 due to contracting Crohn's Disease and worked as a talent scout. He returned in late 1998 as a member of The Oddities, just in time for the group to get jobbed out on their way out the door. He has also competed for various independent promotions. He was a 1x NWA (Detroit) World Tag Team Champion

with Frankie Laine. He was inducted into the WWE Hall of Fame in 1995. You may have also seen him as wrestler-turned-actor Tor Johnson in Ed Wood.