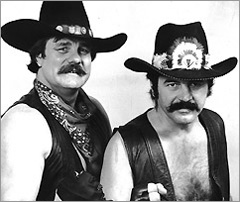 Blackjack Mulligan (born Robert Deroy Windham, November 25, 1942 – April 7, 2016) and Blackjack Lanza (born John Lanza, October 14, 1935) were a Professional Wrestling Tag Team as The Blackjacks. They came together as a team in 1973 and competed for the AWA, WWE, and various territories. They were 1x WWA (Indianapolis) World Tag Team Champions