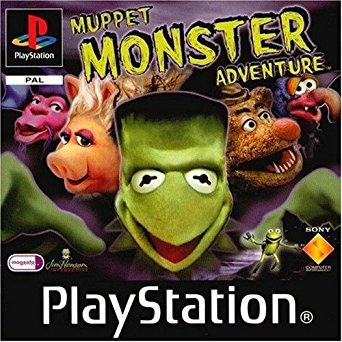 Get ready for some monster Muppet fun!
Advertisement:

A Playstation game released in 2000 and created by Magenta Software and Jim Henson Interactive, adapted from a cancelled Halloween Special.

Muppet Monster Adventure tells a tale where Kermit and friends are invited to go to Dr. Honeydew's uncle's estate. Kermit's nephew, Robin is less than enthusiastic, proclaiming that the place creeps him out. As the main door opens a shadowy figure steps out, and Robin faints with fright. When he awakes he finds that all of the muppets except for Pepe, Dr. Honeydew, Beaker, and himself, have been turned into monsters of different sorts.

To get them back to normal Robin must use a special glove and backpack invented by Bunsen to gain evil energy from the variety of enemies roaming about, and use it to transform his friends back to normal.