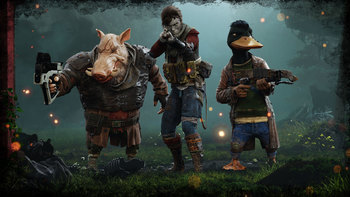 Left-to-right: Bormin, Selma, and Dux, the first playable mutants
"Of course the world ends. You did that to us. When the ice melted, you said nothing. When the plague spread, you did nothing. When the nukes dropped, you became nothing. At least that's what the Elder says. But cheer up. You'll be happy to know that despite your mistakes, life remains. In a small settlement high above the raging river, people are living and thriving. We call it the Ark."
— Bormin
Advertisement:

Mutant Year Zero: Road to Eden is a post-apocalyptic Stealth Based Turn-Based Tactics game developed by The Bearded Ladies Consulting and published by Funcom, based on the Tabletop RPG of the same name.note a revision of the prequel to Mutant UA The game released on December 2018 for PC, PlayStation 4, and Xbox One.

The story follows the attempts of the Ark mutants, the last remnants of humanity, to survive the harsh, desolate world, with focus on the expeditions of the Stalkers, the brave souls that venture outside the walls for precious resources to keep the people fed and safe, and the machines working for one more day. The plot kicks off with Bormin and Dux on a standard run out for scrap metal, before the Elder informs them the Ark's head mechanic, Hammon, is missing. The search quickly spirals into a desperate, dangerous adventure for survival and trying to prevent yet another catastrophic apocalypse, all while trying to figure out just why exactly the world and they got that way in the first place.

Gameplay is a hybrid of real-time stealth and exploration, sneaking around the wastes and around your enemies' awareness, before initiating turn-based strategy combat. Ideally, this is after you take out lone guards and stragglers away from the pack, before they can alert the rest of their buddies, fire back at you, or use their vast array of dangerous skills, but one wrong move is all it takes for everything to go horribly awry...

August 2019 saw the release of the following:

No relation to Generation Zero, despite them both being post-apocalyptic Swedish Games.