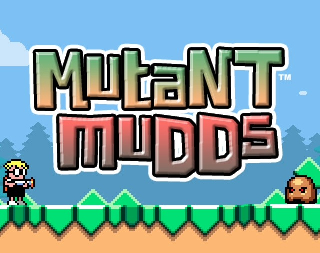 Mutant Mudds is a "12-bit" 2D platformer game developed by Renegade Kid (Dementium: The Ward, Moon) for the Nintendo 3DS and later PC (via GOG.com, GamersGate and Desura) and iOS devices.

One day, a sentient race of mud creatures, known as the Mudds, invades Earth. A young nerdy kid named Max sets off to fight the Mudds with his water cannon and bubble-powered jetpack (and a little help from his grandmother). To drive the Mudds away for good, he needs to search for giant medallions called Water Sprites, which are hidden at the end of each level. Collecting Golden Diamonds (similar to coins in the Mario games or rings in the Sonic games) will allow him to earn power-ups for his jetpack and blaster to help reach secret areas.

The PC version added an extra 20 secret levels for players who had already achieved 100% Completion (and on October 25, 2012, these levels were added to the 3DS version for free).