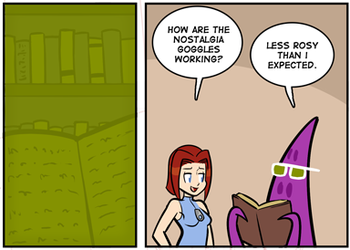 Let's face it: as great as the Game Boy is, the screen has always been a pain in the neck for everybody. You had to contort yourself while randomly adjusting the contrast until you find the exact position where the source of light would be just right without it reflecting on the screen. Little did you know, but Nintendo was well aware of the problem even before its 1989 release, and after multiple internal tests, they realized that lime green would actually bring the best contrast with the LCD overlay. It was not ideal, but it was the best they could make to keep the system effective with an attractive price. The best solution, as history would eventually prove, would have been to have a backlit screen, but the short-lived Game Gear showed that this was way too energy-consuming at the time. Several years later, in 1996, the Game Boy Pocket would finally get rid of the infamous green screen in a Product Facelift attempt, while the backlit screen would be integrated to the Japan-only Game Boy Light in 1998.

Now that the history lesson is over, let's talk good old nostalgia! The Game Boy had some of the most awesome games of the time, even by arcade and console standards: Link's Awakening, Wario Land, Kirby's Dream Land, Tetris, and let's not forget the debut of the Pokémon juggernaut. Between that and the almost 120 millions units sold in a decade, let's say that it probably shaped the childhood of many 90's kids. Then decades passed, people grew up, technology advanced, and games became more and more impressive. But for some, something was lost in the process. In other words: "it was better before", a feeling that kick-started Retro Gaming and waves of Retraux games made for (and often by) this new—and yet old—audience.

But sometimes just making a game "pixelated" is not enough to tickle the nostalgia of the informed consumer. Then try this simple trick: make the game look like a good ol' Game Boy game simply by making it green! This artistic choice will not only save you the cost of a colorist, but also catch the eye of the aforementioned 90's Kid scrolling the app store in search of a "real game". The simple view of those shades of green will ensure him two things: it will be Simple, yet Awesome and Nintendo Hard. Obviously, this is not entirely true. Although games looking like that are often made by other retro-feeling seekers and might actually be really good, it does not make them automatically better (or any different for that matters) than its competitors.

Other developers use the Green Boy Color more sporadically: for examples, it could be used in Nintendo Hard bonus levels, Retraux Flashbacks (or even actual flashbacks for some Long-Runners), or maybe just as a Mythology Gag or homage in the grand scope of video game history, the monochromatic green considered as a Video Game equivalent of black and white cinema. In the end, it is still really amazing to see how much something as painful as this green screen was overshadowed by the quality of its system, and became something positive by association in the collective consciousness.

Sub-Trope of Retraux. Compare Deliberately Monochrome. Lime green is sometimes also used to reference Game & Watch games, as some of them had this screen color (though most were gray or yellow). An acceptable less common variant is the use of sepia tones, emulating the palette used when Game Boy games are played on the Game Boy Color and Advance, but watch out: it is more often a simple Monochrome Past setting than this. An even rarer occurrence is the use of one of the several GBC alternative palettes,note when you press certain button combinations while starting the console ; you can see them on The Other Wiki's parrots

the crimson one being the most popular. However, games using a black and white palette, even to evoke the Game Boy (like the retro level of Kirby's Adventure) do not apply here — though it was how it appeared on the Game Boy Pocket and also one of the GBC retro-palettes, it is not specific enough. And let's end with a quick mention of the less known and appreciated variation (let's call it its little hipster cousin) that is the use of a red and black palette. All hail the Virtual Boy!

See also Matrix Raining Code and Cyber Green, inspired by the green font color used in some of the first models of computers, and Battle Zone 1980, a game which popularized the use of green Vectors to represent old-school games and computers. Those—as well as this trope—can have a Sickly Green Glow if they symbolize some kind of malevolent AI.

Has nothing to do with a young man who would have a green pigmented skin like Beast Boy, nor the assumption that green would be a particularly masculine color (like say blue).