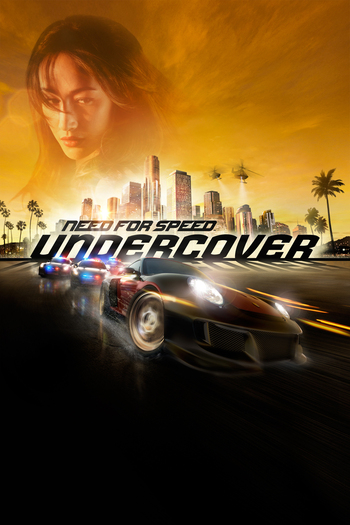 "...And remember, don't play it safe. We want them to see you."
"This place has changed. These guys in their cars — no regard for anyone... It's time to put a stop to what's going on around here."
— Lt. Jack Keller
Advertisement:

The One With… Miami Vice and The Shield as a racing game.

Need for Speed: Undercover is a 2008 racing game, and is the twelfth installment in the Need for Speed series. Developed by EA Black Box and published by Electronic Arts, it was released on November 18, 2008, for PlayStation 2, PlayStation 3, Xbox 360, Wii, Microsoft Windows, PlayStation Portable, Nintendo DS, and a number of mobile phone platforms, with an edition for iOS later released on April 27, 2009.

In the game, the Player Character is an undercover police officer for the Tri-City Bay Police Department (TCBPD), who is informed by their superior, Lt. Jack Keller, that their current investigation into the region's underground street racing is to be joined by Chase Linh, a FBI federal agent looking to bring down an international criminal syndicate operating in the region that is involved in car smuggling. The player is instructed to pose as a new street racer and join in on major illegal street races in order to secure entry into the syndicate. The player achieves this by being recruited into a gang that works with the syndicate, run by the Maio brothers, Hector and Zack. At the same time, the player befriends Carmen Mendez, a member of the gang. The brothers quickly assign the player to steal cars for them during their racing activities. Upon completing the jobs, Chase instructs the player to arrest the gang, including the brothers.

With the Maio gang out of action, the player is then sent to get recruited by a crew operated by GMAC (a former TCBPD police officer), Rose Largo (an honor student who turned to crime), and Brad "Nickel" Rogers (a former boxer). Whilst conducting races along with jobs for the crew, the player is instructed by GMAC to steal a car from Chau Wu, the leader of the syndicate the player is investigating. When the player finds themselves confronted by Chau, he offers to overlook the theft in exchange for the player's help in recovering a car he lost that he needs back, believing it was stolen by GMAC's crew, but a meeting with Carmen suggests the theft was likely committed by someone else. Eventually, the player is instructed to arrest GMAC and his crew, though is unable to locate the stolen car in their possession. From then on, the player must solve the mystery of the stolen car, while being careful that the real mastermind behind the scenes might be a familiar face.

On May 31, 2021, EA announced that the game would no longer be available for purchase in any online stores.