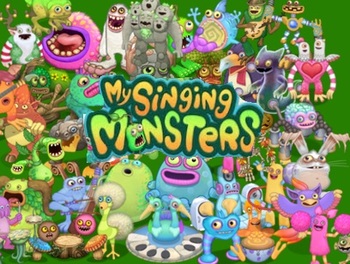 They are yours, and they sing! Need we say more?
Advertisement:

My Singing Monsters is a 2012 free-to-play world-building game for iOS and Android developed and published by Big Blue Bubble, Inc. The player collects and breeds monsters, each of which has a unique musical property (some sing, some make drum-like sounds, etc.). There are multiple islands, each with different monsters, and monsters that show up on multiple islands have different sounds on each island.

The game's success allowed for its 2014 PlayStation Vita port, as well as the creation of a 2015 prequel called My Singing Monsters Dawn Of Fire, alongside the spinoff games My Mammott and My Pom-Pom, both virtual pet games featuring said monsters. A PC port via Steam released on March 24th, 2021. Also announced is a multiplayer party game My Singing Monsters Playground and My Singing Monsters: The Board Game with the former releasing in November 2021 and while the latter is a KickStarter project