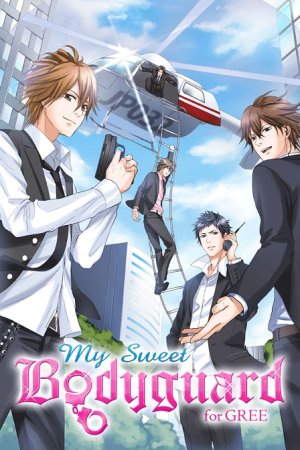 My Sweet Bodyguard is a Romance Game Visual Novel by Voltage, Inc. for iOS and Android devices. An expanded Free-to-Play version has also been released for the GREE social networking service, and a Westernized adaptation has been released by Voltage Entertainment USA under the title To Love and Protect.

The protagonist is a university student who grew up believing that her father died when she was an infant, only to suddenly learn that not only is he alive, he's the Prime Minister of Japan. Her father is eager to have a real paternal relationship with her, but his position presents complications: he is under threat from political extremists who have somehow found out that the protagonist is his daughter, and they're entirely willing to use her to get to him.

To protect his daughter, Prime Minister Hiraizumi assigns a member of his security detail to be the protagonist's full-time bodyguard. She has to choose which of five attractive men will be at her side 24/7 to protect her from danger, and it's not hard to guess where things go from there.

In 2016, the North American adaptation To Love & Protect was discontinued as a stand-alone app and received an Updated Re-release via Voltage USA's Lovestruck app. In addition to updated artwork and further adaptation of the material, this version removes the character of Maxwell and replaces him with a female love interest, Agent Madison Lane.

My Sweet Bodyguard contains examples of the following tropes: