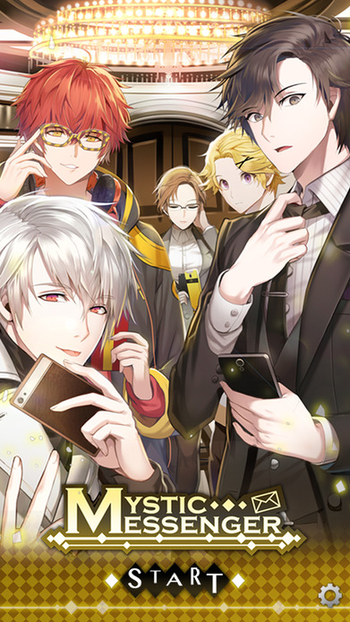 Everyone's waiting for you to start the party! (Left to right: Zen, 707, Jaehee, Yoosung, Jumin)
Mystic Messenger is the third dating game made by the Korean company Cheritz.
Advertisement:

The story starts with the player downloading a mobile app apparently used for chatting with cute boys. After putting in her name and choosing a profile picture, she is contacted by a person simply called "Unknown." Unknown then asks them to go to a specific location and enter an apartment to which they give them the number code.

Once inside of the apartment, the chat with Unknown disappears, and instead the player will be able to see some other people chatting before they notice you. After confirming that the player isn't dangerous, they'll be asked to join an organization called the Rika Fundraising Association (RFA), which used to host fundraising parties until the tragic suicide of its founder Rika. The player is then asked to fill the role of the deceased Rika, conversing with potential guests and trying to persuade them to come to the party.

The game takes place over eleven days during which you can chat with the other members, make or receive calls from them, get private messages and reply to guests' emails. The goal is to get as many people as possible to attend the party, and romance one of the guys (or become friends with the one girl). It uses real time, so if a chat is supposed to appear at 16:15, it will appear once it's 16:15 in the real world, and to get to the next day, the user can either spend hourglasses or simply wait until the next real life day.

Mystic Messenger has the following tropes: