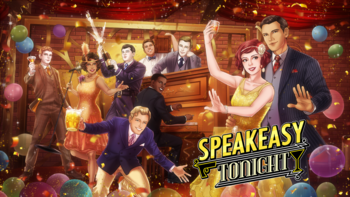 It's the cat's meow!
Speakeasy Tonight is a Romance Game Visual Novel by Voltage USA for iOS and Android devices.
Advertisement:

It's The Roaring '20s. After being caught after returning home from a party by her parents, the player has been sent off from the country to Chicago, the heart of trouble. Seems like a bad choice, but she's been sent to live with her Uncle Charlie, who is supposedly a good man.

But he's not who you think he is. By some stroke of fate, you discover he runs a speakeasy known as the Ice Box behind his hardware store! After spending a night of fun at the Ice Box, news hits home that Charlie has been shot.

After explaining how you discovered the Ice Box to Charlie, he says he'll be out of commission for a while. You volunteer to run the Ice Box in his absence, and he agrees after much convincing. He leaves the Ice Box to you under one condition: you have one of his associates watch over your work.

And thus, your story as the Ice Box Flapper begins. Get ready to dive into a world full of booze, hot jazz, and even hotter men!

And who knows? Maybe that associate you're working with might just fall in love with you!

Your choices consist of:

The original app closed at the end of 2016; a new version of the game was subsequently released as part of Voltage USA's Lovestruck app, promoting rival gangster Gerald O'Fallon to love interest and adding a new love interest: Sofia, a singer at the Box and informant for the gang.