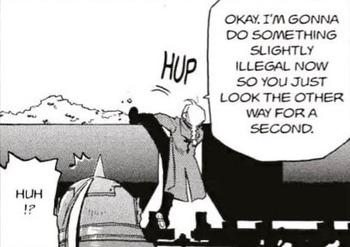 Number four: If they don't reach a peace, that's alright:
Time to get some pistols and a Doctor on site!
You pay him in advance, you treat him with civility
(You have him turn around so he can have deniability)
— "Ten Duel Commandments," Hamilton
Advertisement:

Plausible deniability is a condition under which a person or persons' culpability might be denied, or at least mitigated, by pointing to a situation that either leads them to take the action they took, or to deny that they were responsible in the first place.

According to Wikipedia, the term was "coined by the CIA in the early 1960s to describe the withholding of information from senior officials in order to protect them from repercussions in the event that illegal or unpopular activities by the CIA became public knowledge." The scope of the term has broadened since then.

While intended in the context of more serious affairs, the term can refer to any number of trivial matters. Speaking at San Diego Comic-Con, prolific comic book writer, Len Wein explained the lack of original films, and the large number of sequels, prequel and spin-offs as well as adaptations of novels, comics, TV shows, video games and older movies, is because Hollywood "runs on the principle of plausible deniability," and that if studio executives can point to a good reason why they green-lit a turkey, it would be more plausible to deny their bad judgement by pointing to the property's existing market.

This is also a reason to use a Diplomatic Back Channel to have discussions with another nation you'd rather not come to light. Instead of public visits and negotiations, it involves a friend-of-a-friend string of people who just happen to be able to pass messages back and forth.

Plausible deniability is often used to make it seem like fantastic events within a series could be taking place in the real world, by hiding the evidence so that most of the in-world population could deny that the events are happening — we call that a Secret History. Frequently takes the form of Stepping Out for a Quick Cup of Coffee. Contrast Implausible Deniability, where you try to do this, but your statement can't be believed in the least.

"Are there four of you in this room?"

"Are there four of you in this room?"