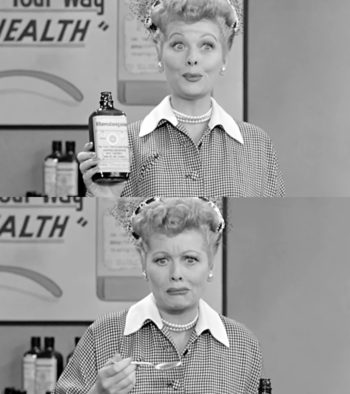 Lucy learns how awful Vitameatavegamin is for the first time.

Facial Dialogue occurs when a character is communicating not just their emotional reactions or intense feelings, but entire reams of dialogue using nothing more than their facial expressions and without saying a single word. When two characters do this to each other, it results in entire paragraphs of byplay, all perfectly understandable to the audience despite the entire exchange being silent.

Used correctly, such scenes can be as good as, or even better, than those with actual spoken dialogue. The Kuleshov Effect is one key trick to use, as tight editing can turn the same expression into unlimited amounts of subtext.

Eye Take, Eyebrow Waggle, Eyelash Fluttering, Aside Glance, Fascinating Eyebrow, and Secret Message Wink may be used as part of the Facial Dialogue, but by themselves are only limited versions. Often the forte of The Silent Bob, The Voiceless, the Silent Snarker, and The Quiet One. Often featured in a No-Dialogue Episode. It is just as often used by characters who are perfectly capable of speaking, but just don't on this occasion, but in that case, you should consider whether or not it qualifies instead as a Meaningful Look. Contrast Nonverbal Miscommunication when it backfires.