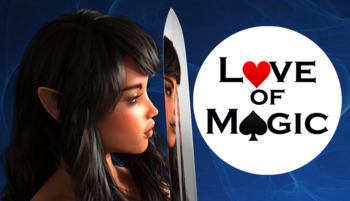 Your heart is too soft. You must find the one that will guard it with naked steel.
The fire will burn, the hammer will fall, but the Sword of Mankind must be forged for what is to come.
Advertisement:

Love of Magic is a harem H-Game Visual Novel by Droid Productions, based on a modernized version of Arthurian Legend.

The player-named protagonist is flying to Scotland for graduate school in magic. His mother, Jannice, tells him to look up her friend Chloe when he gets there. Chloe, a young-looking woman with glowing purple eyes, is a Sorceress trying to turn her pub — the Aleister Crowley — into the premiere drinking establishment for the magical world.

He encounters Princess Emily Pendragon, great-granddaughter of King Arthur, and they fight a Minotaur Lord together. They meet again at school, are assigned homework together, and end up falling in love. Meanwhile, the protagonist (hereafter called MC) finds himself involved with a large number of other characters, mostly female, as his legacy turns him into something considerably more than just another Evoker.

In addition to the main plot and side quests, there is a complex combat system built around a 5x5 poker solitaire game. Multiple types of gems can be slotted in for different hands, allowing for large amounts of flexibility - lightning gems can cause opponents to miss turns, fire gems will cause lingering damage, ice gems will decrease damage opponents can cause, rage gems will build up the damage you do while also doing a small amount of damage to you, poison gems do higher damage that doesn't apply until the board clears, and more. Different companions can have different effects, ranging from Emily's shield to Katie's fire damage to Dylan's healing to Chloe's ability to replace a card with a Joker.

And, as a harem H-Game, MC has the option to have sex with just about every woman he meets. However, there's a lot more story than sex in the game.

The game falls more into the ADV style of Visual Novel, with a linear storyline. While the player's choices can affect details of the game, they will not cause a story branch or anything similar; they will mostly affect the reactions of other characters and may gain the character stat or money bonuses for making the 'right' choice.

As Book II is still in development, this article primarily covers Book I.

The game is available on Steam, on Itch.io

, and from the developer's page

on Patreon. It is available for Microsoft Windows, Apple Macintosh, Linux, and Android.

Tropes found in Love of Magic include: