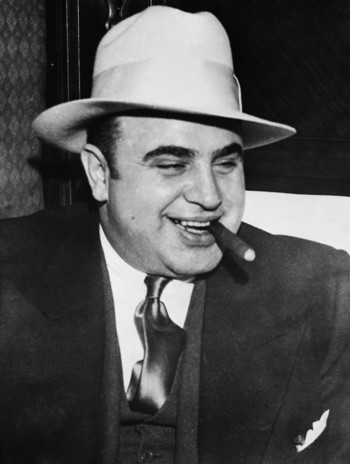 "Hell, it's a business... All I do is supply a public demand. I do it in the best and least harmful way I can. I can't change the conditions. I just meet them without backing up."
"He's OK. He's from Brooklyn, that's it."
— Jimmy Darmody, Boardwalk Empire
Advertisement:

(January 17, 1899 – January 25, 1947) was one of the first iconic American gangsters of the 20th century. He was the fourth son of first-generation Neapolitan immigrants. Born in New York City on January 17, 1899, Al dropped out of school and let himself be caught up in street gangs. During his teen years, Capone received his famous facial scars during an altercation with a man whose sister he insulted. His brawling behavior as an adult brought himself to the attention of racketeers Frankie Yale and Johnny Torrio.

Torrio subsequently invited Capone to join him as a partner when he took over the businesses of Chicago crime lord "Big Jim" Colosimo and expanded his operations to take advantage of the lucrative career of bootlegging created by the passing of 18th Amendment in the United States, banning the manufacture, importation, and sale of alcoholic drinks. After Colosimo's murder in May 1920 (many believe that Capone personally killed him), Torrio and Capone soon established themselves as one of the major players in Chicago's rising organized crime world.

Torrio and Capone established a monopoly for illegal activities in the nearby town of Cicero, but their South Side Gang was still caught up in a mild turf war against Irish-American bootlegger Dion O'Banion and his North Side Gang. When O'Banion was murdered, all hell broke loose amongst the gangs in Chicago and a Mob War began as his subordinates sought revenge. Torrio, a pacifist who narrowly survived an assassination attempt during these events, opted to abandon Chicago and leave all his operations to Capone.

Capone brought things under control with the murder of O'Banion's successor, Hymie Weiss, and set about establishing himself in the establishment of Chicago. While he encountered resistance from other gangland rivals, like George "Bugs" Moran (who inherited O'Banion and Weiss's North Side Gang) and his former mentor Frankie Yale (whom Capone's henchmen assassinated in New York in July 1928), by 1928 he largely dominated Chicago's rackets and began expanding his influence into other cities as well.

More than his contemporaries, Capone also cultivated a public reputation as a "businessman" who merely answered a public need by providing alcohol; his friendliness with the media and associations with various athletes and celebrities in Chicago didn't hurt. Capone often hosted soup kitchens for the poor, and paid the hospital bills of bystanders, especially children, who were wounded in gangland disputes. (His affection for children, at least, appears to have been sincere, considering that he was a doting father to his only son, Albert Francis "Sonny" Capone.) He also established ties with Chicago politicians, including the corrupt Mayor, William "Big Bill" Thompson, which prevented his prosecution by local authorities.

Things started going downhill again when Capone had seven rival gangsters, mostly members of Moran's South Side Gang, killed in the 1929 Saint Valentine's Day Massacre, bringing him unwanted national attention. While there is some speculation that he was innocent of that particular crime, or that the killing was engineered by his subordinates without Capone's knowledge, a number of his henchmen (among them "Machine Gun" Jack McGurn, Fred "Killer Burke" and John Scalise) were soon connected to the massacre through circumstantial evidence and their own, after-the-fact boasting. The brutality of the killings shocked the nation and Capone's reputation with both the press and public immediately nosedived.

At this point, the Federal government finally stepped in. The FBI arrested Capone in March 1929 for failing to testify in a grand jury investigation. Though he was soon released, this incident showed that Capone was no longer immune from prosecution, and he found himself increasingly unwelcome anywhere outside of Chicago. The Treasury Department, which directly oversaw the enforcement of Prohibition, assigned Eliot Ness to do some damage against Capone with his handpicked team of incorruptible agents nicknamed The Untouchables, while IRS investigations into his massive secret income for the purpose of tax evasion charges were underway.

Capone finally went to trial in 1931 and though he was able to avoid being tried for myriad crimes, the courts ultimately convicted him for something he didn't see coming - tax evasion. He couldn't fix that jury, owing to the judge on the case switching the jury pools at the last minute, preventing Capone's men from bribing or threatening them. After being convicted, Capone was imprisoned at Alcatraz Island in San Francisco. During his imprisonment, a latent case of syphilis he had developed finally hit the tertiary stage, and the damage to his nervous system completely destroyed him. He was released in 1939; too ill to resume command of the Chicago Outfit, he retired to Palm Island, Florida with his family and died eight years later.

Not a member of The Mafia , although his organization, the Chicago Outfit

, as well as Capone himself, sat on The Commission.