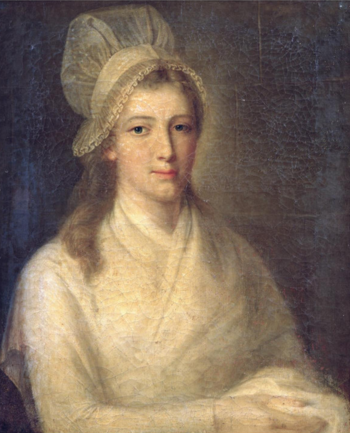 Born in Saint-Saturnin-des-Ligneries, Écorches (in present-day Orne), Normandy, France, her mother and older sister died when she was a young girl. Her father, unable to cope, sent her and her younger sister to the Abbaye aux Dames convent in Caen. There, she studied in the library and was influenced by the works of Plutarch, Jean-Jacques Rousseau, and Voltaire. Around 1791, she started living with her cousin, Madame Le Coustellier de Bretteville-Gouville.

When the French Revolution started to turn into a Reign of Terror, she sided with the Girondin faction. She also worked to support women's rights. When the radical Jacobin faction started mass killings, she decided that Jean-Paul Marat, one of its leaders, needed to die to save France. This was because Marat ran a newspaper called L'Ami du peuple (The Friend of the People) where he would regularly list so-called enemies of France for the Jacobins to kill. She blamed him for the brutal September Massacres and became really angry when Marat called for Louis XVI to be killed. On July 9, 1793, she went to Paris, carrying a copy of Plutarch's Parallel Lives, and bought a six-inch kitchen knife. She wrote Adresse aux Français amis des lois et de la paix ("Address to the French, friends of Law and Peace"), a letter explaining her motives. She originally planned to assassinate Marat in front of the National Convention to make an example of him, but Marat couldn't make it because he had developed a painful skin condition.

On July 13, 1793, she went to Marat's house, claiming to have information about a planned Girondin uprising. Marat received her in his bathtub because he regularly bathed with medicinal herbs to soothe his skin condition. After a short discussion, Charlotte pulled out the kitchen knife she had concealed in her dress and stabbed him in the chest. His dying cries alerted his wife, Simone Evrard, and his neighbors, who seized Charlotte. She was arrested and put on trial.

At her trial, she stressed that she acted alone so the Girondins were not to blame. She claimed that she had received no training and did not practice with her knife; the fact that she killed Marat so easily was pure luck. She said she killed Marat because she feared he would lead France to ruin, saying, "I have killed one man to save a hundred thousand." She sent a letter asking her friend, the politician Gustave le Doulcet, to defend her, but the letter did not reach him in time. She was found guilty and sentenced to the guillotine. She gave a Last Request, saying, "Since I still have a few moments to live, might I hope, citizens, that you will allow me to have myself painted." This was granted, and she was allowed to pick the artist, Jean-Jacques Hauer. She sat serenely in her cell as Hauer painted her portrait (the page image).

On July 17, 1793, she was taken to the guillotine. She was completely calm, believing she had saved France. Her poise and serenity touched everyone, including Charles-Henri Sanson, the executioner. However, shortly after she was decapitated, a man named Legros, a carpenter who did some last-minute repairs on the guillotine, picked up her head and slapped it across the face. According to witnesses, her face briefly reacted, turning from peaceful to indignant. Everyone present, including Sanson, was outraged by this show of disrespect and had Legros arrested, where he was imprisoned for three months. Her body was autopsied as the Jacobins believed there was a man sharing her bed who coerced her into performing the assassination, but she was found to be a virgin. Unfortunately, Charlotte's actions had the opposite effect of what she intended. Instead of shutting down the Jacobins, they treated Marat as a martyr and intensified their killings, making the Reign of Terror much worse. To the people who did not hate her for what she did, she was regarded as a folk hero who helped change the perception of women being weaker than men by carrying out an assassination all by herself.

In 1847, the writer Alphonse de Lamartine gave her the famous nickname l'ange de l'assassinat (the Angel of Assassination).