Western Animation / The World of David the Gnome 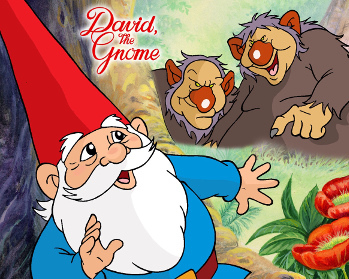 Soy un gnomo (I am a gnome)
Y aquí en el bosque soy feliz (and I'm happy here in the forest)
bajo un árbol vivo yo (I live under a tree)
Junto a su raiz... (Together with its root[s])
In every wish and dream and happy home,
you will find the kingdom of...
THE GNOMES!
Advertisement:

The World of David the Gnome (1985) was a Spanish-produced animated television series based on the children's books Gnomes and The Secret Book of Gnomes, by the Dutch author Wil Huygen and illustrator Rien Poortvliet, with production handled by BRB Internacional. The English dub aired on Nickelodeon in the late 1980s and early 1990s, with the English adaptation handled by Canadian firm Cinar Films, in association with Miramax and produced by Harvey Weinstein (yes, THAT Miramax and THAT Harvey Weinstein) and followed the adventures of one David the Gnome, who in most episodes traveled through the forest on his pet fox Swift and rescued animals that were injured or in danger.

The series was followed by a Spin-Off, The Wisdom of the Gnomes, featuring different gnome characters but set in the same universe. A retelling of the original series, The New World of the Gnomes, features David and his nephew Tomte as they travel the world to save animals and preserve nature as it is endangered by problems of modern-day pollution and environmental dangers.