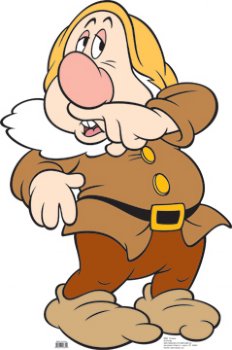 Very common in western animation, when one character is starting to sneeze and current situation calls for being quiet, this character or someone else will use a finger under nose to stop the sneeze from happening. This is typically followed up with a GIANT sneeze about three seconds after the finger is removed.

This trope is Truth in Television. There's a pressure point under your nose that, if you press it, temporarily stops the sneeze reflex. Note that you need to press it; simply holding your finger under your nose will have no effect (much like many examples on this page). A similar and equally effective strategy is to press the sides of the nostrils together to relieve the itching sensation; a more clandestine method is to tickle the roof of your mouth with the tip of your tongue.

Compare Inconvenient Itch and Potty Emergency. Attempts to avert Pepper Sneeze or Sneeze of Doom with this trope happen sometimes.

How to Catch a Cold

The man feels a sneeze coming on due to his cold, so he hold a finger to his nose.

How to Catch a Cold

The man feels a sneeze coming on due to his cold, so he hold a finger to his nose.