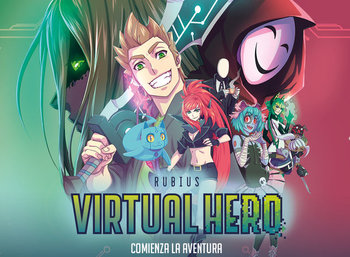 Animated Adaptation of the Spanish comic book trilogy of the same name, based on an original idea by famed Spanish YouTuber Rubén Doblas "ElRubius", with Lolita Aldea, the cartoonist behind the original comic, on board as one of the character designers.

The series follows Rubius (voiced by himself) after he receives a pair of state-of-the-art virtual reality glasses, the ORV, that transport him into the Game Worlds. He will soon find out that it's a trap: himself and 99 other players are trapped in the Game Worlds as part of an Evil Plan hatched by the mysterious Trollmask, who is obsessed with Rubius and has lured him into the game to defeat and humiliate him. To foil Trollmask's plans, Rubius soon enough recruits a Ragtag Bunch of Misfits, including his virtual cat assistant G4T0, Zombirella and Slimmer, and Sacred Huntress Sakura, who is kidnapped by Trollmask's henchmen early on.

The first six episodes of season 1 were released on October 12, 2018 on Movistar+'s on demand service; the remaining six were released weekly between November 23 and December 28, 2018. The second season premiered on February 28, 2020.

Tropes seen on this series: