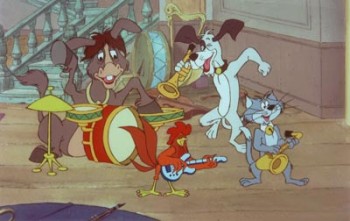 Los Trotamúsicos was a 1989 Spanish animated adaptation of the German fairy tale The Bremen Town Musicians by The Brothers Grimm.

It was originally an animated feature that more or less told the same story as in the fairy tale, but expanded on it by making the animals and the robbers individual characters:

They are confronted by three robbers and their dog:

Other recurring characters are:

Also, contrary to the fairy tale the cast does make it to Bremen and become famous musicians. The success of this feature eventually led to a spin-off in the form of a TV series.

Not to be confused with other animated adaptations of the same story, like the Russian Town Musicians of Bremen the German animated movie The Fearless Four, or the short-lived American series The Bremen Avenue Experience.