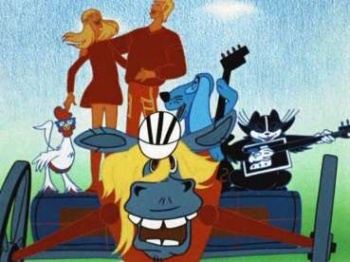 A Soviet-animated musical made in 1969, loosely based on the story of The Bremen Town Musicians.
Advertisement:

It had one direct sequel, On the Trail of the Bremen Town Musicians, made by the same creative group in 1973. Another sequel was released in 2000, called The New Bremen Musicians.

The original short and its sequel are available on YouTube with (rhyming) English subtitles:

Not to be confused with the German adaptation of the same fairy tale The Fearless Four and/or the Spanish adaptation Los Trotamúsicos.