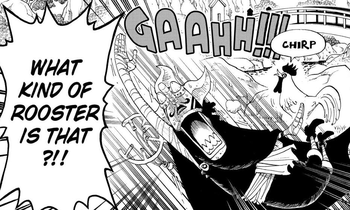 In fiction, animals make a lot of sound. With some animals such as dogs, cats or cows, the sound is very familiar (and often represented as a Written Sound Effect). With some animals, their real sound is not very well-known, but there is a Stock Sound Effect that represents them in media (such as the characteristic screech of the Red-Tailed Hawk used for any sort of bird of prey, or chimpanzee chatter used for any kind of monkey). Occasionally an animal that is normally mute will be given some sound for threatening effect (for example, sharks letting out a growl as they open their jaws). Even though the latter sounds are not realistic, they are so commonly used that we don't even notice them.

Sometimes though, the creators just throw away any - real or perceived - realism and make up a sound for the animal in the name of Rule of Funny. Either they have no idea what sound the animal makes and just come up with something silly, or they intentionally give the animal a different sound that the audience expects for comedic effect as a form of Vocal Dissonance. Occasionally the animals will straight up Pokémon Speak, or let out the Signature Roar of a famous movie monster (as a literal Shout-Out). Another possible Shout-Out is the animal singing the theme tune of a famous work - such as a "Jaws" Attack Parody where the famous "dun-DUN'' music directly coming from the shark itself. Often, a big sound will come out of a small creature or vice-versa. Sometimes, the justification is that the animal is "speaking a foreign language". If an individual animal makes a noise it's not even personally known to make, expect Voice Change Surprise.

Subtrope of Noisy Nature and Incorrect Animal Noise. Compare Animal Talk, when animals sounds like humans due to Translation Convention (which is usually not Played for Laughs). Compare Sound Defect and Wacky Sound Effect, where other unlikely sounds are deliberately used nonsensically.