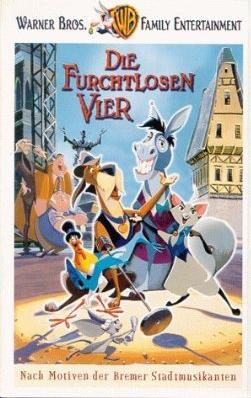 The Fearless Four (Die Furchtlosen Vier) is a German animated film about four Funny Animals that all have one thing in common: they want to sing, but can't for whatever reason (they're supposed to be working at something else for Fred and Buster; for Gwen, her family wants to kill her and for Tortellini, it's because he's a fairly worthless husband along with the fact that he and the rest of the chickens of the farm are taken to the slaughterhouse). The film follows, in order, the easygoing bloodhound Buster, the woeful donkey Fred, the graceful Siamese cat Gwendolyn and the self-assured rooster Tortellini. Originally intending to go to Paris to seek fame, Buster and Fred, and Tortellini and Gwen later, wind up going in just the wrong direction—to Bremen. They only realize their mistake when they get lost in the forest and come upon an owl, who tells them they are, in fact, nowhere near Paris. She does however, point them in the direction of Bremen, the nearest city.

Setting up as street performers the next day, they attract the attention of a few people, and regardless of the apparent ordnance against street performers, get scouted by a Mix Max Sausages (the Bland-Name Product manufacturer that has apparently taken over Germany) manager, who refers them to the corporate head, who in turn agrees to sign them on. The Fearless Four (as they have dubbed themselves) agree to sign a contract, with only slight vocal reservations. It is perhaps worth noting that the caricature of one of the music managers is a stereotypical girly man, with a ponytail and lisp.

Originally billed as a rock and "classic" (meaning 80s-esque) music group, the Four's rock songs send Mix Max stocks soaring in several parody newspapers (the Fall Street Journal among them). As they begin to pass out of the public eye, things get steadily worse for the group, which isn't helped by their rebellious attitude. Rest of the movie condensed: prison break, discovery of evil plot to turn kitties and other cute things into sausages, apparently recapture/repentance of the Four and then finally public disclosure of the plot during a concert. Oh, and there was a classical-music-fan mouse somewhere.

The story was very loosely inspired by the folk tale of the "The Bremen Town Musicians". Not to be confused with the Soviet adaptation of the same fairy tale Town Musicians of Bremen and/or the Spanish adaptation Los Trotamúsicos.

Tropes in The Fearless Four: