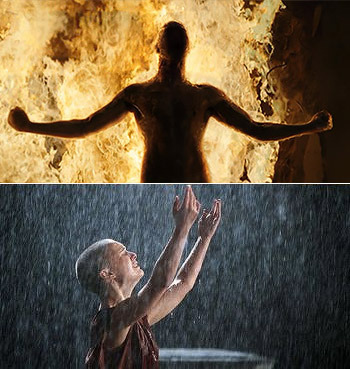 Two very different characters are reborn from their suffering in a single scene. One through fire, one through water.
"I have been baptized twice: once in water, once in flame."
— Joshua Graham, Fallout: New Vegas
Advertisement:

As two of the four classical elements, and probably the two most frequently used in fiction, it's no surprise that fire and water can play dominant roles in building atmosphere in visual media. A raging rainstorm can carry as much pathos as a burning house, just as a roaring bonfire can be as comforting as a calm lake. When a writer wants to form an immediately obvious contrast between two characters, places or events, though, it can be particularly visually stimulating to associate one with fire, and one with water—perhaps drawing a contrast between creation and destruction, tranquility and belligerence, or nurturing and consuming. A downpour can signal the end or the turning point of a Battle Amongst the Flames.

Alternately, it can be equally stimulating to create a contrast between fire and ice, with the two playing into differing flavors of destructive power, or mutually destructive elements that help form the world. See Fire/Ice Duo for this specific variant applied to characters.

If writers want to play with religious motifs, this trope can play into imagery frequently associated with baptism, with a "baptism by fire" forming a contrast to traditional baptism by water. If this trope is employed, expect lots of playing around with the Orange/Blue Contrast or some other form of Color Contrast.

Compare Evil Is Burning Hot and Evil Is Deathly Cold (when this trope is employed in two differing portrayals of evil), Kill It with Fire and Kill It with Water, Lightning/Fire Juxtaposition (where Lightning replaces Water as Fire's counterpart), Elemental Rivalry (when this trope is used to set up two elemental wielders as adversaries), Life/Death Juxtaposition (when one of those elements has a creation motif and the other a destruction motif), and Hailfire Peaks (where the ice/fire variant is built into the terrain).

This trope frequently comes into play in Four Element Ensembles, when characters' uses of fire-based and water-based abilities are used to set them up as Foils. Depending on the form that it takes, this trope can be a sub-trope of Elemental Powers (if characters are associated with fire, water or ice through their uses of elemental abilities), Empathic Environment (when changes in the state of the physical world reflects changes in the emotional state of the characters that inhabit it), or even just Elemental Motifs (if the rain and fire are more metaphorical than literal). See also Red Oni, Blue Oni. When this trope is paired with gender dynamics, the Water tends to be a woman while the Fire is often a man.