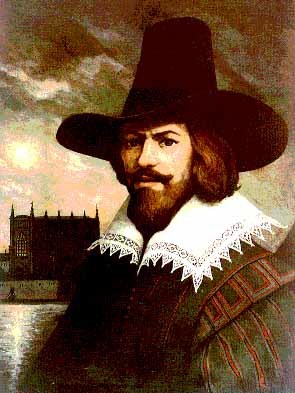 The famous guy behind the mask.
Remember, remember, the fifth of November,
The Gunpowder, treason, and plot.
I know of no reason why the gunpowder treason,
Should ever be forgot.
Advertisement:

Guy Fawkes (known as Guido when fighting in Spanish Holland, April 13, 1570 – January 31, 1606) is remembered as the explosives expert recruited for the infamous Gunpowder Plot of 1605, led by Robert Catesby.

Around that time, Britain was ruled by the newly-installed James I of Great Britain, who reigned as king over a unified Britain from 1603 to his death in 1625 (the U.K. consisting of England, Ireland, and Scotland after the crowns were politically united in March 1603) and as James VI of Scotland from 1567 to 1603 prior to becoming King over the U.K. (don't question the British monarchy), who was a Kirk Presbyterian Christian. That is, the new king was not a Catholic. The last Catholic ruler of England was Bloody Mary, who killed people of non-Catholic faiths and witches (there may have been overlap). James I & VI came to England in 1603 and supported the Puritan Christians, who were even less similar to Catholics than he was. The Puritans hated Catholicism and saw it as excessively indulgent and as tarnishing God's name. In 1604, James banned religious petitions and made England Puritan, which was decisively an anti-Catholic statement. The Gunpowder Plot was an effective Catholic Revolt, and it occurred primarily out of the real fear of being murdered for their faith.

The entire government, composed of members of the gentry, was to convene on the Palace of Westminster on the fifth of November for the opening of Parliament. A Lord received an anonymous tip-off to not attend this meeting, and it's clear that this information was passed to King James, who ordered the police of the day to check the building out. After doing some detective work, they asked why the basement had been leased for such a long period by a Catholic. The oddity of this was the length of time, since most people leased such a space for a short-term period for their goods. The police of the day searched the basement and found Fawkes at the end of a Powder Trail leading to ridiculous amounts of gunpowder. Enough to obliterate the building, the clock-tower, and a good portion of the Square Mile. Fawkes was subsequently tortured and sentenced to be hanged and afterwards to be drawn and quartered. As it so happened, they never got past the hanging, which resulted not in the intended suffering through strangulation prior to further torture but rather in a broken neck. He was then dismembered, and his remains were distributed and exhibited in different corners of England, with his head joining others on Tower Bridge.

Because of all that, every Fifth of November, his traitorous act is remembered with fireworks and a bonfire. An effigy of him — called a guy — is typically burned in a bonfire, and since the U.K. is by and large a bunch of small towns and communities vaguely connected by terrible roads, the effigy is often made and thrown on the fire by high school final years or recent leavers. This is a sort-of present from the town and is considered quite an honour. As Alan Moore noted, English history had a long tradition of secretly admiring and rooting for criminals, and over the decades, Guy Fawkes is often spoken of admiringly as "The last man to enter Parliament with honest intentions"note That those intentions were to murder everyone present is well-understood by such admirers, but for the sake of comedic effect is seldom mentioned. and November 5 celebrations often use the ambiguity of the day's title — "Guy Fawkes Night" — to mockingly celebrate and honour him. As such there is a long subversive tradition within England of making Fawkes into a quasi-Robin Hood figure even if the man was plainly a religious terrorist.

Bad blood seems to have been washed away since the Gunpowder Plot, since a descendant of ringleader Robert Catesby married a descendant of the crown — the parents of Kit Harington.

Tropes associated with Guy Fawkes include: