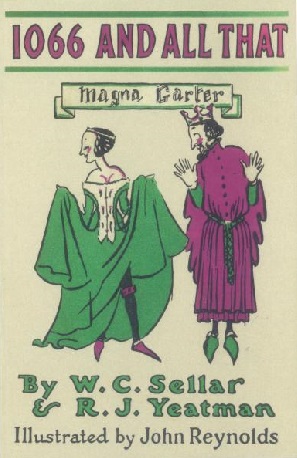 "Honey, your silk stocking's hanging down"
1066 and All That is The Abridged History of England by Walter Carruthers Sellar and Robert Julian Yeatman, with illustrations by John Reynolds. The book's lengthy subtitle is A Memorable History of England Comprising All the Parts You Can Remember Including One Hundred and Three Good Things, Five Bad Kings, and Two Genuine Dates. It was first printed in 1931 after being serialized in Punch!.
Advertisement:

The text covers only the memorable parts of English history, starting with the memorable Roman Emperor Julius Caesar's invasion of Britain in 55 B.C., one of the only two memorable dates in English History (the other being, of course, William the Conqueror, Ten Sixty-six), and giving special attention to all the Good Things that happened to make England C. of E. and Top Nation.

The book also includes several Test Papers, as well as a few Errata.

Craig Brown of Private Eye wrote a continuation entitled 1966 And All That, written in a careful imitation of the style and going up to the early years of the twenty-first century.

Kate Charlesworth and Marsaili Cameron published a graphic novel alternative version in 1986 entitled All That... : The Other Half of History, that plays off the absence of women from the original.