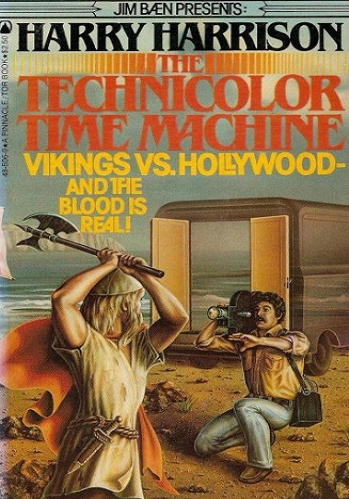 The Technicolor Time Machine is a farcical novel written in 1967 by Harry Harrison, author of The Stainless Steel Rat series. It's about show-business, Vikings, and time travel, and what happens when you combine the three.
Advertisement:

Barney Hendrickson is a mediocre director working at the floundering Climactic Studios who sees no hope of getting a job elsewhere if the studio goes under. To that end, he convinces the studio's owner, L.M. Greenspan, to invest in a risky venture: using the vremeatron, a time machine invented by one Professor Hewett, Climactic will be able to shoot a historical epic that would take months in the space of a single weekend, on location no less. Their subject of choice: the Vikings that purportedly settled in the New World hundreds of years before Columbus. Barney hastily assembles a team to make the film, including Chinese-American scriptwriter Charley Chang, trigger-happy stunt men/bodyguards Tex and Dallas, Norse expert Jens Lyn, and for the lead roles the dim-but-dashing Ruf Hawk and the voluptuous Slithey Tove.

Naturally, things get complicated in a hurry. First, Barney learns that return trips on the vremeatron have to arrive after the vremeatron originally left. Then, Ruf is struck down with a broken leg on the first day of shooting, forcing Barney to improvise by casting Ottar, a brawny, booze-loving Viking who is fortunately quick to grasp the whole "acting" thing. On top of all that, it seems there aren't any Viking settlements in Newfoundland after all... at least, not until Barney gives Ottar the idea.

One humorous scene occurs when one of the actors is injured on the beach in Scandinavia around the year 1060. The director goes back through the time gate to call for paramedics from the future. The paramedics drive to the studio, into the stage building, across the time barrier, and end up on the huge beach a thousand years in the past, where the injured actor is. One of the paramedics, who has no idea he's not on the studio, says, "Boy, you guys got a huge stage here!"